Artwork currently unavailable. Please fill out the contact us form, stating your interest and we will let you know when artwork becomes available. Thank you.

An integral part of the American revival of Norwegian rosemaling, or rose painting, was Stoughton born, Ethel Kvalheim. She was exposed to the practise by her neighbor, Per Lysne, who developed a rosemaled wooden “smorgasbord plate” created for mail-order sales.

In 1930, Ethel graduated from high school and began cleaning houses. After she married Norwegian-born Arthur Kvalheim, she began work at a cleaning plant and continued there for the following six years. During 1939 and 1940, she worked part-time at a local hardware store and the following year, she stayed home full-time to take care of the house and children. She quickly became restless and began sketching neighborhoods and landscapes for fun. One piece she created during this time, “Koshkonong Church and School” was accepted in the Rural Art Exhibit and purchased for the Permanent Collection. She continued to create on Sundays when her husband to take care of the children and the evenings when they were asleep.

Kvalheim was never confident in her artistic abilities and rarely entered exhibitions for fear of rejection. In 1941, Kvalheim visited John Stewart Curry in his studio, where she was assured her paintings were good and was given tips on how they could improve. She was again encouraged by Arthur Colt, whose classes she took weekly in 1943 resulted in the regular meeting of four Stoughton female artists for mutual help and study.

Among landscapes, Kvalheim was known for her rosemaling. She followed traditional rosemaling, but each piece was distinct in her own style.

Kvalheim was commissioned to rosemal the interior of the Stoughton Home Savings and Loan Bank. In 1969, she received the Vesterheim Museum of National Rosemaling Association's first Gold Medal Award. In 1971, she was granted the Medal of St. Olaf for her artistry by the King of Norway. 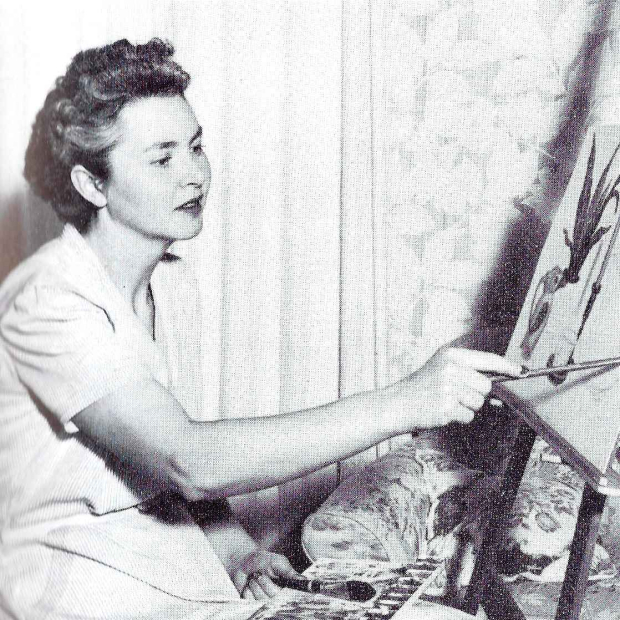