Raised in DePere, she graduated with a B.S. in Art Education from the University of Wisconsin, Madison.

Leslie married Tim Trewyn in 1963 and moved to Waupun where they both began teaching careers. They built a home and raised their family on a small farm.

For more than 50 years, Leslie taught and created art noted for colorful, distinctive acrylics based on her travels and readings.

She began exhibiting her paintings in 1963, and through decades of experience, evolved an eclectic, distinctive, personal style, inspired by literature, childhood memories, romance, and her life on a small farm. Her art reflects extensive world travel, including China, Europe, Russia, West Africa, New Zealand, South America and Mexico, taking her experiences as points of reference and transforming them into visual creations. Trewyn said, “I try to evoke the feeling of a trip rather than paint the actual scenes.”

Trewyn exhibited in her studio, galleries, art fairs and museums, receiving many awards.Her work was exhibited nationally and has been part of numerous large exhibits throughout the country, including Coconut Grove Festival of the Arts, Chicago Old Town Art Fair and Ann Arbor Street Fair.

In creating personal, original art, Ms. Trewyn found fulfillment in both the process and the product. “When I paint,” she said, “It’s about as close to Paradise as there is.” 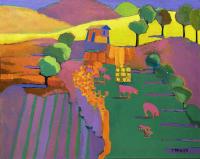 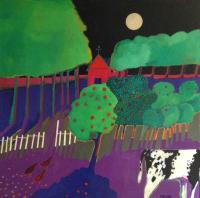