Via The Artwork of Mary Theisen - Helm

Mary was born in Loyal, a small town in central Wisconsin and lived in Milwaukee throughout her adult life. She showed a creative spirit and desire to pursue art from an early age. Alas, "artist" was not something that a woman in the 1940s could expect to pursue alone. After high school graduation she was shipped off to Eau Claire Wisconsin to attend secretarial school with two pairs of socks and $100.00. Undaunted, she made her way to Milwaukee in the mid 1940s and with her small salary attended the Milwaukee Art Institute and the Layton School of Art.

Via The Artwork of Mary Theisen - Helm

Mary was born in Loyal, a small town in central Wisconsin and lived in Milwaukee throughout her adult life. She showed a creative spirit and desire to pursue art from an early age. Alas, "artist" was not something that a woman in the 1940s could expect to pursue alone. After high school graduation she was shipped off to Eau Claire Wisconsin to attend secretarial school with two pairs of socks and $100.00. Undaunted, she made her way to Milwaukee in the mid 1940s and with her small salary attended the Milwaukee Art Institute and the Layton School of Art.

Personal art development was primarily extensive self-study through galleries, museums and libraries, and travel on trips throughout the Wisconsin countryside, Mexico, New Mexico, and Arizona. Study in Europe included painting in Italy, France, Switzerland, Great Britain, Germany and the Netherlands.

Over ten years of Friday night drawing sessions at the University of Wisconsin-Milwaukee contributed to her portrait and figure painting experience, and sustained her art spirit through many years of full time administrative work.

Mary expressed herself in many very diverse styles. Instead of limiting herself to the often art school enforced "develop your own style", Mary’s immense creative spirit demanded constant exploration. With wide eyes she delved and jumped into various styles and interpretations. Certainly Mary was never restrained.

Mary’s art was very personal. Often what a piece meant to her was far simpler and yet more abstract than apparent. Instead of some larger deeper meaning, her works may be reflections of how she saw the subjects. She saw colors and uniqueness in forms and had to capture them. In looking at her paintings of trees for example, we find that quite often the subject was not of the ubiquitous fall scene, but instead a twisted trunk. Thus, the tree does not represent man’s impact on nature or other allegory, instead it is the blending of a unique subject form, a mood, and colors to form an impression. This is similarly represented in her figure sketches. Far from her childhood of drawing glamour figures, Mary found lonely and simple everyday persons and scenes more interesting for the subject of her sketches. Old, leaning and unique houses and buildings often figure in her landscapes. Many sketch books are filled with works of old people on park benches or European streets, and abstracted scenes of the grotesque.

Her watercolors show us a freedom in the medium that is rare to achieve. Mary recalled that she loved watercolors because they were dynamic. Often using a very wet technique she achieved some very interesting semi-abstract works. Without a sense of confidence and complete freedom wet technique watercolor can be frustrating. Some of the incredible freedom she possessed can be readily seen in her figure paintings from the community nude figure drawing sessions at the University of Wisconsin Milwaukee. Some of the poses were only short ten-minute units. In a short time Mary could capture the human form. One contemporary artist, Fred Berman stated that she was "an incredible draftsperson".

Some of her finest works are minimalist works done in a few minutes with either pen or pencil. She had an ability which showed itself already in sketches from her Layton School of Art days (1944-48) to capture moods and expressions in figure drawing with a few minimal strokes.

One aspect of some of her works was an inherent eye for the psychological. Old age and pain were represented as well as depression and joy. One self portrait "psychological self portrait" #3647 was juried into the Charles Allis Art Museum’s 1996 Self Portraits, Wisconsin Artists’. The work is very dark, and shows dispair and depression. Another work that is a bit disturbing is number 2273. A simple sketch of half of her face looking worn and cadaverous, it was drawn just before her death. Sometimes eloquence doesn’t come with a pretty face…

The same artist that could capture the deeply disturbing could turn on a dime and express powerful joy as in a vivid floral or wild color explosions, then express the simple perfection of a sunrise.

The capture of emotion and its ties to color and shape were part of Mary’s talent.

"As a student of color, light and form, I search for emotional content through direct observation using representation, abstraction and symbolism to reflect my reaction to sensations and metaphor."….

"Painting has enriched my inner spiritual world as I seek to capture the essence of content and express my intimate impressions of life and living."

My underlying approach to painting is to get in touch with my inner spirit to express the elusive core of our common visual delights and experiences, such as the sense of our identity, the varied moods of the landscape, and the capturing of the beauty of our sensory world in visual metaphor.

Some of Mary’s abstract works had no intent when they started. I remember asking her what she was painting and getting the answer " I don’t know yet, I am waiting for it to come out" (my paraphrase of memories). In cataloging her works I often had to sit and contemplate what she was capturing, finally giving it up as a work that may mean different things to different people. Other abstracts often had human faces of the grotesque emerging from nowhere out of what one may have thought to be formless colors of vague plant like objects. Some of the best abstract pieces must be viewed at length in order to appreciate the intent of the artist.

Mary’s abstractions often captures a sense of motion in what one would think is simply a vague still-life. Some of the best of these are the "underwater" and "weed" abstractions which are too animated for a mere still-life.

Although Mary painted many portraits, she found much portrait painting to be too restraining and exacting. She wanted to capture a mood rather than try to produce a photograph. When she did produce portraits, there was always some of this need for emotion inherent in the work. One of her more polished simple portraits was "Erik’s kindergarten portrait" which hung in our house for over 20 years. (#2230) She did some commission portraiture but often found that capturing what an individual wants in a portrait can be dicey at best.

Far from a "famous" artist during her lifetime she instead was an "artist’s artist". That is, when she exhibited her works, often the persons attending included other Milwaukee artists. She was well known among other Milwaukee artists such as Joseph Friebert, Shomer Lichtner, John Colt, etc. She showed her works from the early 1950’s to 2003, often submerging for years at a time due to raising a family and working full time. Mary was not a born self promoter. Some artists paint several works and then spend all effort on producing cards, prints, posters, and generally promoting the several works. Mary did promote herself as an artist, but the art always came first. Given the choice of how to spend the hour free to her after working all-day and coming home to cook dinner and do laundry on our medieval laundry tub, she would choose to create and free her soul. New ideas for works came all the time. Often she would be in the middle of one work and put it aside for a second work as a new idea revealed itself.

Mary as an artist was full of joy. Joy at the uniqueness of a subject, and joy at being able to capture the essence of mood and visual experience of what she saw, bright or dark. She shared this joy with those other artists that she painted with.

Mary was the first Director for the University Wisconsin Milwaukee Union Art Gallery (1972-'75), and created and managed the Art Sales Gallery. In addition, Mary managed art fairs, selected art and design for interiors, acted as an art consultant, and art competition judge.

Paintings are included in local, city of Milwaukee, Wisconsin, Midwest and West Coast private collections. The artist has been the recipient of numerous awards in juried and invitational exhibits. 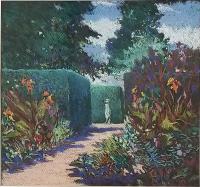 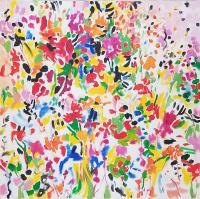 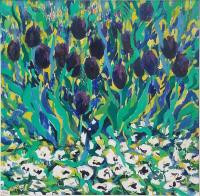 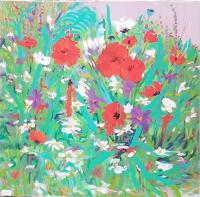